What To Do When God Says No

Have you ever wanted something, and you prayed for it, but it didn’t work out, and you felt that God said “No”?

Depending on the things you were taught, you may have come to the conclusion that God was sending a clear message that that thing or experience you desired was not actually for you.

If you want to know what to do when God says “NO” keep reading.

This may go against everything that you know and believe, but before you dismiss this article and exit the site in disgust, consider this.

The only time that God has ever been recorded saying “no” to anyone was when Paul asked him to remove the thorn from his side, to which he replied “my grace is sufficient.”

“(7) And lest I should be exalted above measure through the abundance of the revelations, there was given to me a thorn in the flesh, the messenger of Satan to buffet me, lest I should be exalted above measure. (8) For this thing I besought the Lord thrice, that it might depart from me. (9) And he said unto me, My grace is sufficient for thee: for my strength is made perfect in weakness. Most gladly therefore will I rather glory in my infirmities, that the power of Christ may rest upon me. (10) Therefore I take pleasure in infirmities, in reproaches, in necessities, in persecutions, in distresses for Christ’s sake: for when I am weak, then am I strong.”

The point that this scripture makes is that his (Paul’s) spiritual strength was made perfect in his physical weakness. If he were weak, the only explanation for what he could accomplish in that state would have to be because of God.

Outside of that situation, whenever a Believer asked, according to the bible, s/he received.

Instead of walking around, assuming you’re Paul, you should rest assured that God’s word is true. He tells us plainly in several places in the bible that we can get wealth, speak things into existence (whether positive or negative…life or death), ask and receive.

So, if the word tells us that we have the power to get exactly what we want, why are so many people convinced that he tells us no?

Many people believe God says no when things don’t work out, because they have either been misinformed, or conditioned to believe so through trying experiences.

WHAT YOU NEED TO KNOW

What you should know is that delays, setbacks, and detours are only for your learning experience. Once you get the lesson, it’s your job to try again.

Too often people preface their goals by saying “I’ll give it a shot, and if it doesn’t work, at least I can say that I tried.”

This is a lazy way to approach a goal of any kind. It says that you aren’t willing to try more than once, and that you’re already preparing for failure.

If you approached your goals in a different way, believing that the first try would be the try that gets the results you ultimately want, you would give it all you’ve got. If things didn’t quite pan out perfectly, you would immediately begin searching your brain for things that could have been done differently. You would look for solutions to fix whatever went awry. Then, you would try again.

It is understood that after a few tries, if things still aren’t moving in the right direction, it could affect your confidence, but that just means there is more to learn.

Experts say that it takes 10,000 hours of doing something before you get really good at it.

If that is true, why are so many people ready to throw in the towel after the first few attempts?

God is not saying “no”. In fact, you are the one saying “no” to yourself. Get rid of that ideology and start persisting. Keep striving for what you want until you get it. Period.

P.U.S.H (PERSIST UNTIL SOMETHING HAPPENS)

Some people have even used “Pray” as the “P” in the above acronym. As a matter of fact, let’s talk about prayer. Firstly, let’s discuss what prayer isn’t.

🙏🏾🚫 PRAYER IS NOT an empty set of words sent from your heart and/or lips into the abyss never to return in any form. Pessimists and unbelievers have criticized people for choosing to pray over difficult situations, because they hold the flawed belief that prayer is equal to doing nothing.

This couldn’t be further from the truth, if you understand what prayer actually entails.

Now let’s talk about what prayer is.

🙏🏾 ✅ PRAYER IS making a request to God and setting your intentions. The bible says that God is able to do exceeding and abundantly above all we ask or think  “according to the power that worketh in us” (Ephesians 3:20).

This means that if there is power that is already at work within us, we just have to activate it through prayer and action. The bible also says that faith without works is dead. Right? So if we believe that we can send a prayer and change things, we must also believe that we have what is necessary to transform our prayers from the spiritual into the physical.

NOW, WILL YOU MAINTAIN THAT GOD IS DENYING YOU, OR WILL YOU BEGIN SAYING “YES” TO YOURSELF?

Author of The Mask and Creator of The Write Mind Studio

Andriea Denise is an author, educator, and entrepreneur. She is the founder of The Write Mind Studio, and passionate about helping people to become the best versions of themselves and to live the lives they actively create. 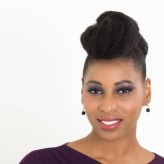 Leave a reply Click here to cancel the reply

Visit The Writer’s Block on our website to learn

Get your mind “write” at The Write Mind Studio

Your thoughts, ideas, and works of art deserve to

Whatever the mind can conceive the body can achiev

Self care includes your mind, body, and soul. Eat